In a review of Reformed Virtue After Barth: Developing Moral Virtue Ethics in the Reformed Tradition by Kirk J. Nolan, I criticize Nolan’s choice to examine John Calvin, the Westminster Confession, and Jonathan Edwards as antecedents to his real interest in discussing the ethics of Karl Barth.

In a study devoted to Reformed virtue ethics, I wondered “why it is worthwhile to spend so much time on Calvin when there were others—his contemporaries and succeeding generations—who did take up the question of virtue more extensively and systematically.” While I still believe this latter claim is true, recent work by my colleague David Sytsma has convinced me that there is much more material in Calvin’s work that is amenable to and indeed best understood within a virtue-ethical framework than I had previously thought (or, for that matter, than Nolan demonstrated in his study). 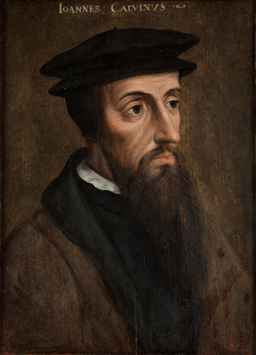 In “John Calvin and Virtue Ethics: Augustinian and Aristotelian Themes,” available via open access from the Journal of Religious Ethics, Sytsma observes:

As a theologian, Calvin himself did not write a treatise on ethics such as Melanchthon, Vermigli, and others did. But his theology integrates traditional concepts of virtue and he assumes the usefulness of philosophical ethics for civil society. There is no support in Calvin’s writings to support the supposed “repudiation of teleological virtue ethics” by the magisterial reformers for which Gregory argues (2012, 265). Instead, Calvin’s theological works provide ample justification for the subsequent development of Reformed virtue ethics, whether in the form of ethical treatises on the virtues or commentaries on the Decalogue, which correlate the commandments with virtues.

So even if we perhaps shouldn’t start with Calvin or look solely to his work in our efforts to understand the relationship between the Reformed tradition and virtue ethics, Calvin certainly should be part of the conversation.

Sytsma’s article is wide-ranging and worthy of close study. Hopefully its appearance in the Journal of Religious Ethics will help to temper some of the mainstream caricatures and misunderstandings of Calvin in particular and the Reformed tradition more generally.

Sytsma’s piece joins a growing body of important revisionist literature that corrects older and even some contemporary scholarship about the relationship of the Reformed tradition to the broader Augustinian and Thomistic traditions. This literature is such that the researcher today can be said to be left without excuse for repeating and rehearsing erroneous tropes about the scope and substance of discontinuity between someone like Calvin or Vermigli or Zanchi and the patristics and medieval scholastics, to say nothing of their Roman Catholic and Lutheran contemporaries.

For some examples of this kind of work with relevance for the development of Reformed virtue ethics after (and in addition to) Calvin, I recommend:

One of the reasons the Junius Institute exists is to help disseminate scholarship on the Reformation and post-Reformation eras, and so when some of our scholars and associates publish items, we’re happy to take note.

To wit, JI senior fellow Richard Muller has had an ongoing discussion with Paul Helm on the place of Jonathan Edwards (1703-1758) in relationship to the Reformed tradition. The most recent issue of Jonathan Edwards Studies, a notable online journal of scholarship relating to the “greatest American theologian,” has the latest installments.

Here’s a list of the essays in order so you can catch up on the state of the question:

To access the articles, all you need to do is register on the JES site and you can download these and other offerings for free. Jonathan Edwards Studies is a publication of the Jonathan Edwards Center at Yale University, which offers a wealth of other resources as well.