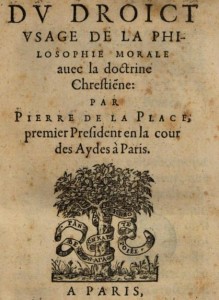 The title of Dr. McGinnis’ talk is, “The Christian Use of Moral Philosophy in Pierre de la Place and Early Reformed Ethics,” and the event will be held at the Boardroom at PRTS on March 17, 2020, from 3:30-4:30pm.

The presentation is related to Dr. McGinnis’ work on Reformed ethics in the post-Reformation period, including his work as a general editor of the Sources in Early Modern Economics, Ethics, and Law (Second Series). A translation of de la Place’s Du droict usage de la philosophie morale (Paris: Frederic Morel, 1562), or On the Proper Use of Moral Philosophy with Christian Teaching, is forthcoming in that series, which also includes volumes on Niels Hemmingsen on natural law and Martin Becanus on fiduciary contractual and promissory duties in the context of confessional conflict.