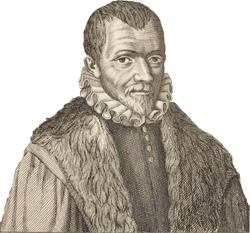 The institute’s namesake, Franciscus Junius, is perhaps not well-known outside the community of scholars interested in Reformed theology of the sixteenth and seventeenth centuries. So who was Franciscus Junius?

François du Jon (1545–1602), Latinized as Franciscus Junius, was a significant Reformed Protestant voice in the era of late sixteenth-century confessionalization. He is perhaps best known as a professor of theology at Leiden University from 1592–1602. Junius was born in Bourges, France, into a family of minor nobility with all of the attendant social and educational advantages of one of such rank. At the age of twelve, Junius matriculated at the academy of Bourges and studied law under the Huguenot jurist, François Douaren (1509–1559) who is recognized as a major voice in articulating the mos gallicus school of applying the fruits of Italian humanism to the legal code of Justinian. Junius also studied under the renowned French humanist, Huguenot, and jurist Hugues Doneau (1527–1591).

As Rester also notes, Junius also would later study under Calvin and Beza in Geneva, and Arminius was named Junius’ successor at Leiden. As Rester puts it, “In 1602 upon his death, it was Junius’ chair of theology (and house on the Rapenburg in Leiden together with most of the furniture) that Jacobus Arminius filled after Junius’ death in the plague that struck Leiden.”

The Post-Reformation Digital Library includes a host of works by Junius in a variety of fields, as well as links to other sources and studies related to this significant representative of early Reformed orthodoxy.