I just thought I’d footnote my three most recent added authors to PRDL: Aelius Donatus (fl. 4th c. AD), Dionysius Cato (fl. 4th c. AD), and Alexandre de Villedieu (c. 1170-1250, and who deserves to be present if only for his somewhat Augustinian place of primary residence).

I have been fiddling with early Calvin, and these are the texts noted by Thurot as typically being used in the University of Paris in the late Middle Ages in the first two grades of preparatory grammatical study.

According to Thurot, Donatus and Cato were the first grade level of the preparatory study, Alexandre the second, and Peter of Spain’s Summulae logicales (which we already have in PRDL) was the third of the three degrees or levels. And, by the way, Charles Thurot, De l’organisation de l’enseignement dans l’Université de Paris au Moyen-Âge (Paris: Dezorby, 1850) is available from Google Books. There is, of course, more recent scholarship but Thurot is still worth consulting.

By all accounts, the 12-13 year-olds who got through this course without particular mental damage were quite proficient, albeit not singing, “Peter of Spain, I adore you.”

Now you can prep your Latin using the texts that Calvin probably used. Check out the annotated Alexandre and ask whether any of us could pass the course!

It’s no secret that Google has large plans for book digitization. Three years ago the company was reported to have had the ambitious goal of digitizing the 129+ million books thought to be in existence within the coming decade. Although the Chronicle of Higher Education reported in March 2012 that Google was scaling back book digitization at partner institutions in the United States, the same report noted that “[s]ome of its digitization efforts have shifted to Europe.” If Google has shifted its efforts to European libraries, early modern historians have cause to rejoice. Indeed, at least in the case of

Koninklijke Bibliotheek (KB; National Library of the Netherlands), which partnered with Google in 2010 to digitize 160,000 public domain books from the eighteenth and nineteenth centuries, book digitization appears to be accelerating.

With most of Google’s partner libraries, it is impossible to know what books are in the process of being digitized. However, the KB catalogue offers a glimpse of books currently tagged for digitization. In order to inform its patrons that a book has been pulled from the shelf, the librarians at KB have added a note: “This book is temporarily unavailable due to digitization.” (“Dit boek is tijdelijk niet beschikbaar vanwege digitalisering.”) A search for this phrase turns up books in the catalogue that either have been recently digitized or will be digitized in the coming months. As of today, there are in the queue over 38,000 titles from the eighteenth century (1700-1799) and 13,000 titles from the nineteenth century (1800-1899).

For users of the Junius Institute’s Post-Reformation Digital Library, this means that in the coming months the collection of available eighteenth-century Dutch theological works is set to rapidly expand. Hundreds, perhaps thousands, of theological works from Dutch Reformed authors will become available in a relatively short period of time. Among these are numerous works by pastors associated with the so-called Nadere Reformatie or “Further Reformation,” including multiple editions of Aegidius Francken’s Kern der Christelyke Leere, which served as a textbook at Calvin Theological Seminary in the nineteenth century. Below is a sampling of links to Reformed theologians with titles set aside to be digitized in the KB catalogue. Taken together, this short list alone represents over 500 digitized titles on the horizon.

Maney Publishing is offering a free period of two week access to its journals in philosophy and religion. These include Reformation and Renaissance Review, Political Theology, and Reformation. Details here.

So, if you don’t have regular access, take the time now to go get, for instance, Richard A. Muller’s “Not Scotist: Understandings of being, univocity, and analogy in early-modern Reformed thought” from the latest RRR. [Update: You’ll need to sign up to get access to Maney’s journals first at the “details” link above. Then you should have access to RRR content, including Muller’s article.] It won’t be available during the free period, but I’m also the guest editor for a forthcoming issue of RRR on the legacy of the Italian reformer, Peter Martyr Vermigli. So keep a lookout for that.

Also, the Renaissance Society of America has announced that its members will now have full access to EEBO. So for the price of RSA membership, you can get access to this important primary source collection.

Our research curator David Sytsma is teaching the doctoral methods course at Calvin Seminary this fall, and he recently passed on that he was discussing the increasing availability of sources that have come to be in the last five years in a recent class session.

He then went digging through some old emails, and found that the original finding list that would grow to become the PRDL, first in wiki and later in the current PRDL 2.0 format, was circulated in October 2008, just over five years ago. You can read more about the transition and development of PRDL in this piece from the Bulletin of the American Society for Information Science and Technology.

David, who directs the PRDL project, writes further, “Looking back through the email thread, it was Jordan who suggested on Nov. 7 that we start a wiki and think about forming a digital research center.” So this day a sort of informal five year anniversary for the beginning of the PRDL and now the Junius Institute!

PRDL now covers over 4,500 authors, with listings of more than 85,000 volumes. Take a look at the original finding list to see where it all began, a short five years ago. 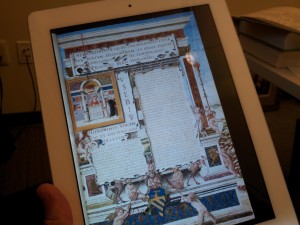 Chronicle of Eusebius of Caesarea (ca. 1480), via e-codices iPad app

One of the more intriguing horizons of development in terms of digital research applications is the creation of mobile apps for displaying and manipulating digital texts. The Google Play app, for instance, which allows you to “favorite” Google Books and the Post-Reformation Digital Library have made a helpful pairing for some time.

I recently got notice of two new apps developed for iOS, and ideally experienced on the iPad. The first is the Europeana Open Culture app for the iPad which “introduces you to specially selected collections from Europeana.” Europeana has come a long way, in my view, since it’s opening, and it will be interesting to see how this app makes the vast resources theoretically available at the site actually useful.

The second notice came in today from e-codices, the Virtual Manuscript Library of Switzerland. The e-codices app has been developed for the iPad and iPhone, and will allow you to “search, browse and view medieval and early modern manuscripts in high resolution” on these devices.

My initial experience with these apps has been a bit buggy and inconsistent, but there are some really promising possibilities for display while travelling, giving lectures, presenting papers, and teaching in the classroom. Right now my impression is that the apps might be most helpful for displaying digital texts that you are already aware of rather than really finding new things.